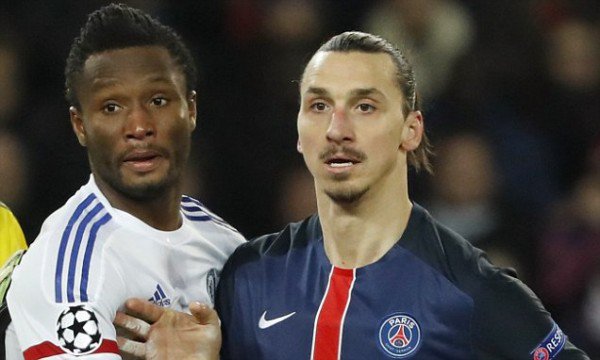 John Mikel Obi who got on the score sheet for the Blues yesterday night has expressed mixed reactions about the UCL showdown.

Super Eagles and Chelsea midfielder John Obi Mikel has expressed disappointment over his side’s defeat to Paris Saint-Germain on Tuesday in a UEFA Champions League round of 16 first leg tie. An Ibrahimovic free kick had gone off Mikel to put the hosts ahead but the Super Eagles player leveled scores just before half time. Edison Cavani came on the the last stage of the game to give PSG the winner. Speaking to BT Sports after the game, Mikel said the team was disappointed.

“They got the first goal, it was a deflection. I had to fall in because he [Lucas] was going deeper and deeper into our 18-yard box. And then the free kick as well just skipped off my feet and went into the back of the net. “But we came back strong as well, but we’re very disappointed to have lost the game. We know they’re a very good team. Our aim was to come out here and get a goal and we’ve done that tonight. We still have the second leg to play back home, so we have to take that back home and capitalise on that and make sure we build on that. “We are very disappointed with losing the game, i thought we did very well, played very well and defended very well when we had to. I’m so very disappointed to have lost the game.” Mikel told BT Sport.
Thank's for reading my article Chelsea Midfielder, Mikel Obi Talks About Champions League Goal And Team’s Loss
Created at 2016-02-17

Back to posts
This post has no comments - be the first one! Chelsea Midfielder, Mikel Obi Talks About Champions League Goal And Team’s Loss