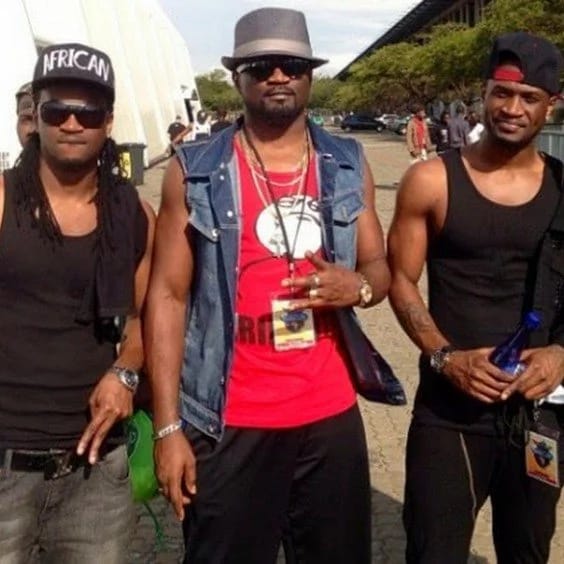 The recent issue between Peter, Paul and Jude Okoye will look like a PR stunt if they eventually make up, which is already very likely with Peter’s recent post on Instagram wherein he made an obvious statement about apology. But beyond that, an actual break up will be good for all parties involved and there are a number of points that prove this. Peter Okoye of P-Square makes thinly- veiled apology on Instagram following earlier rants on Twitter in which he went against brother Jude Okoye. Looking at the current situation, if the Okoye brothers are indeed ‘PR stunting’, then the benefits are numerous. For starters, they will remain in the headlines for some time as a result, and anything they get involved in will enjoy prime time in the media. This is always the case when celebrities clash

. Fans and critics take sides, critique and then observe happenings in the weeks and months leading up to any major album release or anything else the celebrities are handling.

Saeon But regardless of celebrities riding on the back of controversies into further prominence and commercial gains, one party will always be on the losing end when all has been said and done. It is always a ‘David and Goliath’ tussle, with one party suffering defeat or an outright career harm in some situations. File photo of Paul, Peter and Jude Okoye. This is fact and history has shown this over and over. Given this, many have taken a deeper look at the current tussle between Peter, Paul and Jude Okoye and are coming up with series of conclusions on who stands to gain more from the group separating (if that becomes the case).

As you ponder on this, below are five points we have gathered so far from the narrative that prove that a break up could be helpful for the Okoye brothers and the Nigerian music industry in general:

1. The fans are actually bored of the same old stuff and maybe a break up will ‘rile up’ each party to outdo the other on the next track, mixtape or album if they decide to part ways.

2. A break up will bring about innovation and fresh ideas. Having listened to the sounds from the brothers over the years, a whole new type of music vibe from them will not be out of place, maybe a digression into other genres like Reggae, Highlife or Hip hop who knows? Just anything fresh would do.

3. The brothers talk too much and so maybe a split is what they actually need so the world can see who the real McCoy is. This will also help in the aspect of bringing about competition and healthy rivalry which are key ingredients for success.

4. Competition is good for business, very good actually as it helps increase profits. Whatever the case, this public face off between the brothers help will help shoot up record sales and boost whatever personal involvements they have going on if they decide to do music separately.
Thank's for reading my article 5 REASONS P-SQUARE AND JUDE OKOYE MIGHT NEED TO BREAK UP
Created at 2016-02-19

Back to posts
This post has no comments - be the first one! 5 REASONS P-SQUARE AND JUDE OKOYE MIGHT NEED TO BREAK UP